What are the benefits of a grid-connected solar system vs. the Off-Grid system?

Clean Energy Reviews gives clear illustrations and explanations of what On-grid or grid-tie solar systems are by far the most common and widely used by homes and businesses. These systems do not need batteries and use common solar inverters and are connected to the public electricity grid. Any excess solar power that you generate is exported to the electricity grid and you usually get paid a feed-in-tariff (FiT) or credits for the energy you export.

Unlike hybrid systems, on-grid solar systems are not able to function or generate electricity during a blackout due to safety reasons. Since blackouts usually occur when the electricity grid is damaged; If the solar inverter was still feeding electricity into a damaged grid it would risk the safety of the people repairing the fault/s in the network. Most hybrid solar systems with battery storage are able to automatically isolate from the grid (known as islanding) and continue to supply some power during a blackout.

Batteries are able to be added to on-grid systems at a later stage if required. The Tesla Powerwall 2 is a popular AC battery system which can be added to an existing solar system. 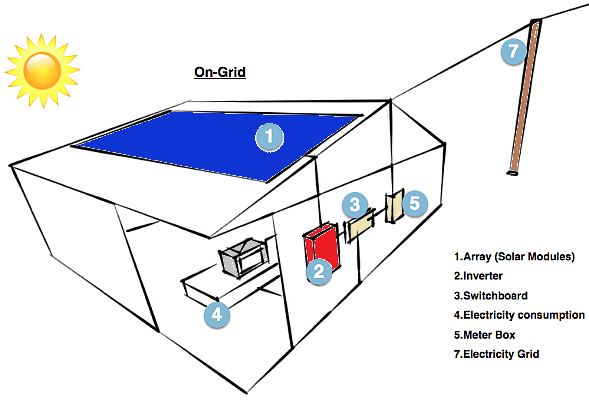 In an on-grid system, this is what happens after electricity reaches the switchboard:

An off-grid system is not connected to the electricity grid and therefore requires battery storage. An off-grid solar system must be designed appropriately so that it will generate enough power throughout the year and have enough battery capacity to meet the home’s requirements, even in the depths of winter when there is less sunlight.

The high cost of batteries and inverters means off-grid systems are much more expensive than on-grid systems and so are usually only needed in more remote areas that are far from the electricity grid. However battery costs are reducing rapidly, so there is now a growing market for off-grid solar battery systems even in cities and towns. 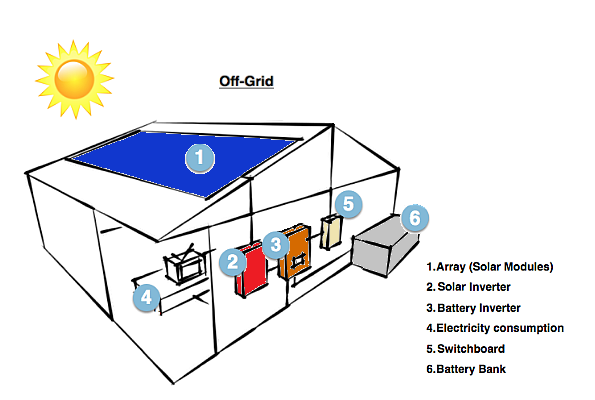 There are different types of off-grid systems which we will go into more detail later, but for now, I will keep it simple. This description is for an AC coupled system, in a DC-coupled system power is first sent to the battery bank, then sent to your appliances. To understand more about building and setting up an efficient off-grid home see our sister site go off-grid/hybrid

Modern hybrid systems combine solar and battery storage in one and are now available in many different forms and configurations. Due to the decreasing cost of battery storage, systems that are already connected to the electricity grid can start taking advantage of battery storage as well. This means being able to store solar energy that is generated during the day and using it at night. When the stored energy is depleted, the grid is there as a backup, allowing consumers to have the best of both worlds. Hybrid systems are also able to charge the batteries using cheap off-peak electricity (usually after midnight to 6 am). 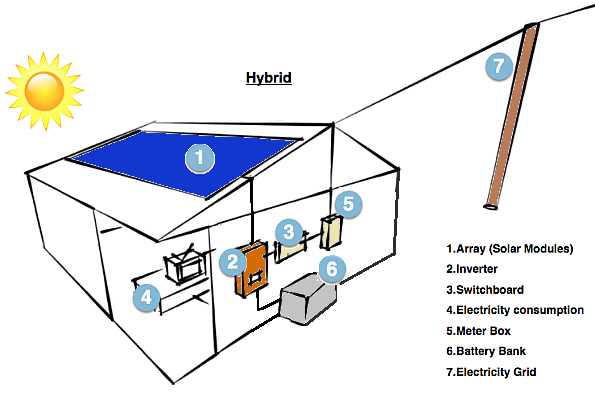 There are also different ways to design hybrid systems but we will keep it simple for now. Hey. Now that’s information! I didn’t know any of this.